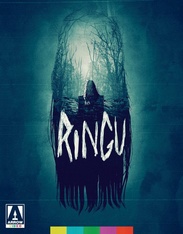 After the death of her cousin, a reporter uncovers stories about a mysterious video tape that kills people precisely one week after they view the tape. She dismisses the stories as urban legend until she learns that her cousin's best friend, who also watch the tape, died at the exact same moment as her cousin.

Now, after viewing the tape herself, the reporter must team with her ex-husband to unravel the mystery of the Ringu - before her week is up.