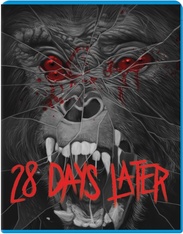 A virus is accidentally released from a British research facility. Those infected with the virus develop uncontrollable fits of killing rage.

Twenty-eight days later, humanity is on the verge of extinction and a small group of survivors in London battle other survivors while avoiding the deadly virus.

Rated R for violence and gore, language and nudity.