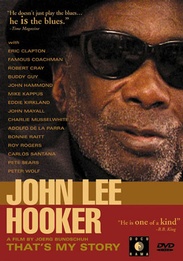 A teenage runaway who never went to school, John Lee Hooker had trouble spelling his name, even into his eighties. But, despite these humble beginnings, John Lee Hooker is today considered one of the most influential musicians of the 20th century â the Godfather of the Blues, the King of the Boogie.John Lee Hooker will ever be remembered as one of the most influential musicians of the 20th century. Filmed just a few years before his death, JOHN LEE HOOKER: THATâS MY STORY takes audiences inside the life and times of this Blues legend and the music that influenced a rising generation of rockers. John Lee tells the tale himself, with help from his family, closest friends, and musical colleagues including Eric Clapton, Bonnie Raitt, Carlos Santana and Robert Cray. From humble beginnings as the son of a sharecropper, through his experiences touring the Jim Crow South, to his performances in San Franciscoâs Boom Boom Room toward the end of his life, this film chronicles the journey that ultimately established Hooker as Blues royalty.Rare and captivating live performance footage includes Hooker playing Blues favorites âThatâs My Story,â âBoom Boom,â âBoogie Chillen,â and the Grammy Award-winning âIâm in the Moodâ duet with Bonnie Raitt.