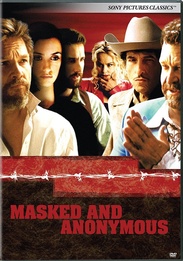 In a fictional America caught up in a civil war that is tearing the nation apart, a benefit concert is being organized.

A travelling troubadour named Jack Fate (Dylan) is sprung from jail by his scheming former manager (Goodman), to headline a concert with the expectations to bring peace to a country that is entrenched by chaos, lawlessness and pandemonium.

Rated PG-13 for some language and brief violence.