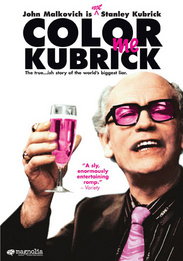 For months Alan Conway, a perfect stranger, passed himself off as one of the greatest film directors of all time, Stanley Kubrick.

Conway knew nothing of the filmmaker or his films, but this didn't prevent him from using and abusing the credulity of those who thought they had come in contact with the mythical and equally discreet director. His success was founded not only on boundless chutzpah but also on the fact that Kubrick's real face and voice were practically unknown since - like Terence Malick and Chris Marker - he remained one of filmdom's few stubborn holdouts in the Fame Game. Conway is brought uproariously to life by John Malkovich in a jaw-dropping tour de force, in which he stops at nothing in depicting Conway's shameless character, whether cadging a few quid for cab fare, or pulling off more outrageous scams. Director Brian Cook, who served as assistant director on Kubrick's THE SHINING, BARRY LYNDON, and EYES WIDE SHUT, along with screenwriter Anthony Frewin, who acted as Kubrick's personal assitant from 2001: A SPACE ODYSSEY on, bring an intimate knowledge of both the legendary director and Conway's antics to this hilarious and fascinating true story. As producer Michael Fitzgerald notes, "The film has three hidden messages : One, anyone can be Stanley Kubrick. Two, all crimes perpetrated in the name of celebrity will be rewarded by celebrity itself. Three, if you ever meet a celebrity, watch your wallet."