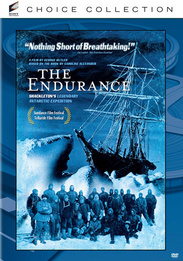 In August, 1914, Sir Ernest Shackleton, a renowned explorer set sail with 27 men on his ship THE ENDURANCE. His plan was to be the first expedition to cross the Antartic continent.

His ship was beset in hevey sea ice off the coast of Antartica and was eventually crushed. Marooned on four fee of ice over 8,000 feet deep water Shackleton and his crew survived some 635 days and nights without proper shelter or rations in some of the harshest conditions imaginable. Eventually by small boat and foot Shackleton was able to get to safety and then rescue his entire crew.

The Endurance is considered by many experts to be the greatest of all adventures. Miraculously much of the original story was captured on film and in pictures by the ship's photographer. To make The Endurance, the modern filmakers went to all original locations to capture this astonishing story in color in one of the most remote motion pictures shoots ever recorded.