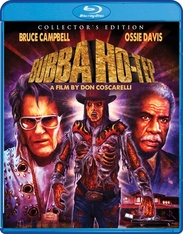 Hail to the king, baby! This film follows the attacks of an ancient mummy in an East Texas rest home inhabited by both Elvis Presley and JFK.