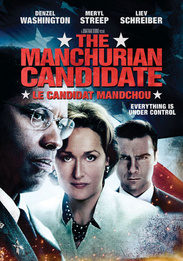 During the Gulf War, members of cut-off platoon are captured and brainwashed by a large corporation to return to the United States following the war as their pawns.

When one of the soldiers becomes the likely next Vice-President of the United States, the full scope of Manchurian's plan is revealed.

Now, the last remaining soldier from the platoon must battle the brainwash and the corporation to prevent them from controlling the largest country in the free world.

Rated R for violence and some language.