Creature from the Haunted Sea 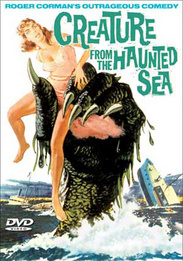 A minor classic, Creature From The Haunted Sea is unlike any other American film of the period. This monster film parody takes swipes at every manner of movie convention - subtitles, musical interludes, etc.

In Castro's Cuba, a ragtag group of loyalists hire an American gangster to smuggle out the nation's treasury. Their boat cruise becomes a nightmare when an undersea monster begins picking them off one by one. This comedy of errors has an intriguing cast of weird characters. Secret agent Sparks Moran, played by (future) Academy Award winning screenwriter Robert Towne (Chinatown, Shampoo), is billed as Edward Wain. The screenplay is the product of the prolific Charles B. Griffith who also wrote Corman's Little Shop Of Horrors and many others.

Creature From The Haunted Sea was made by Corman and company as a quickly improvised afterthought following his productions of Battle Of Blood Island and Last Woman On Earth in Puerto Rico (which is why Last Woman and Creature feature the same cast).

The music score was pieced together by Fred Katz from familiar threads first heard in Corman's Wasp Woman and Little Shop Of Horrors.

Pre-title sequences and a few additional segments were shot by cult director Monte Hellman (Beast From Haunted Cave) to pad out the running time for Creature From The Haunted Sea's T.V. debut.