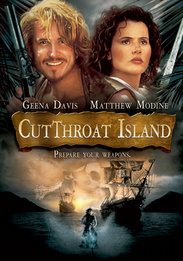 Cutthroat Island is set on the high seas of the 1600's--when the men were daring... and so were the women. It is a rousing tale of buried treasure, battles, duels, and above all, romance. Morgan Adams, the brave and beautiful daughter of the pirate Black Harry, arrives only seconds too late to save her father from being murdered by his own brother, the sinister pirate Dawg Brown. With his last words, Harry gives Morgan his portion of a coveted treasure map and turns over command of his ship. Together with her new crew, Morgan sets off on a mission to find the remaining pieces of the map and lay claim to the legendary fortune of Cutthroat Island. Unfortunately, her own portion of the map is in Latin, making it unreadable to Morgan and her crew. With a price on her head, Morgan risks a trip into port to find someone to decipher the map. At a prison slave auction, she buys the handsome and educated William Shaw, a swindler and thief who has finally been snared. Shaw finds himself an indentured servant to a wild and fearless woman who is determined to fulfill her father's destiny--no matter what the cost.