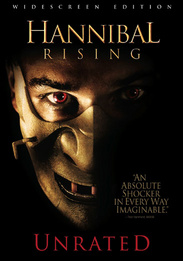 In the most chilling chapter in the life of Hannibal Lecter, find the answer to the most elusive question of all -- why? Reaching back to explore the origins of Lecter's rage, terror and savagery, the story begins in Eastern Europe at the end of World War II when a young Hannibal watches the violent death of his parents -- a horrific moment that changes him forever. Showing a cunning aptitude for science, he hones his skills to exact justice on those that hurt his family, igniting an insatiable lust within a serial killer who was not born, but made.