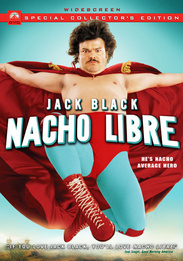 Jack Black is at his comic best as Ignacio, a disrespected cook at a Mexican monastery that can barely afford to feed the orphans who live there.

Inspired by a local wrestling hero, he decides to moonlight as the not-so-famous Luchador "Nacho Libre" to earn money for the monastery -- not to mention the admiration of beautiful nun Sister Encarnacion.

Rated PG for some rough action, and crude humor including dialogue.