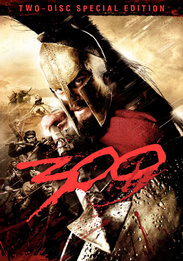 Based on the epic graphic novel by Frank Miller, 300 is a ferocious retelling of the ancient Battle of Thermopylae in which King Leonidas (Gerard Butler) and 300 Spartans fought to the death against Xerxes and his massive Persian army. Facing insurmountable odds, their valor and sacrifice inspire all of Greece to unite against their Persian enemy, drawing a line in the sand for democracy. The film brings Miller's acclaimed graphic novel to life by combining live action with virtual backgrounds that capture his distinct vision of this ancient historic tale.

Rated R for graphic battle sequences throughout, some sexuality and nudity.