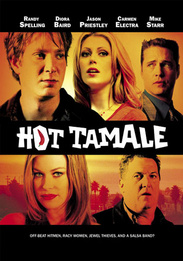 A small sleepy town in Wyoming is just no place for a young man with dreams of playing the timbale drums in a salsa band. Seizing his destiny, Harlan (Randy Spelling) packs up his car, bids the Midwest adios, and heads west to the Mecca of showbiz wannabes everywhere: Los Angeles.

Stopping along the way at a roadside cafe', Harlan encounters the mysterious Jude (Jason Priestley) who is on the run from two vicious thugs. Jude hides a small bag in Harlan's car, which Harlan doesn't discover until he arrives in L.A. where he plans on staying with his Puerto Rican buddy Caesar.

After his first night in L.A., Harlan awakes to find Caesar gone, but in his place is Caesar's friend, the lovely Tuesday Blackwell (Diora Baird).

Caesar has arranged an audition for Harlan with the local salsa band featuring local salsa legend Johnny Polanco. The band rehearses in the middle of a rough Latino neighborhood where a nice boy from Wyoming like Harlan is a 'fish-out-of-water.' But Harlan surprises everyone - he really can play timbales and the band takes him on.

Meanwhile, the two ruthless thugs chasing Jude have discovered that Harlan's got the missing bag. And so has Jude's former partner in crime, the femme fatale Riley (Carmen Electra). The thugs kidnap Tuesday and leave word that if Harlan wants to see her alive, he had better come up with what they're looking for - a fortunes worth of diamonds last seen in Jude's bag. But there are no diamonds in the bag.

Enlisting the help of his newfound friends from the salsa band and their connections to L.A.'s Latino underworld, Harlan throws himself into a wild rescue mission that has him running one step ahead of the cops and headlong into the grips of a pair of ferocious killers.