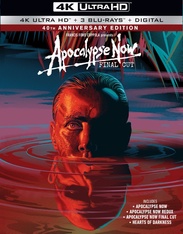 Based loosely on Joseph Conrad's "The Heart Of Darkness", Coppola's Vietnam epic follows Sheen up the Mekong River into Cambodia to find Brando, an officer who has gone mad in the jungle and is running his own empire.

Rated R for violence, grisly images, language, some drug use and nudity.