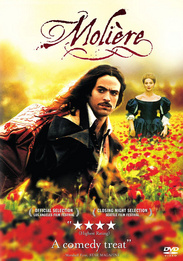 22-year-old Jean-Baptiste Poquelin, also known as Moliere, is not yet the writer that history recognizes as the father & true master of comic satire, author of the Misanthrope and Tartuffe, and a dramatist to rank alongside Shakespeare & Sophocles. Far from it. He is in fact, a failed actor.

His Illustrious Theatre Troupe, founded the previous year, is bankrupt. Hounded by creditors, Moliere is thrown into jail, released, then swiftly imprisoned again. When the jailors finally let him go, he disappears. The combined efforts of historians have unearthed no trace of him before his reappearance, several months later, when his troupe begins touring the provinces - a tour that will last for thirteen years, and culminate in Moliere's triumphant return to Paris in 1658. But what happened to Moliere during these mysterious lost months?

Moliere, we discover, has been released from prison by a wealthy bourgeois, Monsieur Jourdain, who settled the young actor's debts on the understanding that he will teach him the craft of the stage. Hungry for recognition, Jourdain is infatuated with the lovely but poisonous Celimene, whose salon gathers together suitors & great wits.

But the affair must remain secret, kept at all costs from Jourdain's wife, Elmire, a wonderful woman with whom Moliï¿½re himself will fall headlong in love. Unfortunately for him, Jourdain has presented Moliï¿½re as Monsieur Tartuffe, an austere private tutor, to justify his presence. Elmire has nothing but the harshest words for this holier-than-thou figure who has invaded her home. Trapped in this untenable situation, Moliï¿½re will experience all manner of events that will open his eyes and his mind, both to life itself and to his work as an artist. It is from the heart of this tale, and from his passion for Elmire, that Moliï¿½re the great dramatist is born.