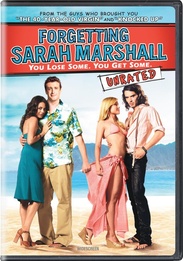 Struggling musician Peter Bretter (Jason Segel) has spent six years idolizing his girlfriend, television star Sarah Marshall (Kristen Bell). Heâs the guy left holding her purse in paparazzi photos and accidentally omitted from acceptance award speeches. But his world is rocked when she dumps him and Peter finds himself alone. After an unsuccessful bout of womanizing and an on-the-job nervous breakdown, he sees that not having Sarah may just ruin his life. To clear his head, Peter takes an impulsive trip to Oahu, where he is confronted by his worst nightmare: his ex and her tragically hip new British-rocker boyfriend, Aldous (Russell Brand), are sharing his hotel. But as he torments himself with the reality of Sarahâs new life, he finds relief in a flirtation with Rachel (Mila Kunis), a beautiful resort employee whose laid-back approach tempts him to rejoin the world. He also finds relief in several hundred embarrassing, fruity cocktails. For anyone who has ever had their heart ripped out and cut into a billion pieces comes a hilarious, heartfelt look at relationshipsâfeaturing Paul Rudd, Jonah Hill, Bill Hader and Jack McBrayer. Part romantic comedy, part disaster film, Forgetting Sarah Marshall is the worldâs first romantic disaster comedy.

Rated R for sexual content, language and some graphic nudity.