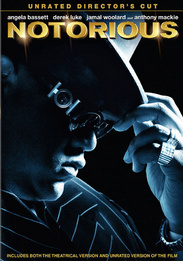 Chronicling the extraordinary life of Christopher âThe Notorious B.I.G.â Wallace, Notorious follows the young rapper from the tough streets of Brooklyn to the heights of superstardom as he juggles the increasing demands of fatherhood, marriage and a music career. Amid chaos and controversy, Biggieâs remarkable talent and fierce determination help to solidify his legacy as one of hip-hopâs greatest MCs.

Rated R for pervasive language, some strong sexuality including dialogue, nudity, and for drug content.