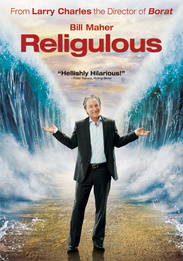 The documentary follows Bill Maher as he travels around the globe interviewing people about God and religion. Known for his astute analytical skills, irreverent wit and commitment to never pulling a punch, Maher brings his characteristic honesty to an unusual spiritual journey.

Rated R for some language and sexual material.