The big moments you (most likely) missed at Sunday night's Oscars

I really had no desire to watch the Oscars last night. I had other things I'd rather spend 3+ hours doing. Because I knew I had to write about the event for this very web site, I reluctantly turned on the broadcast at about 8:00.

The odds are that you found something other to do Sunday evening. Because of that, I'll give a rundown of all memorable things you missed.

Hugh Jackman was a very unconventional pick for host. Well, it's against the recent convention of having a comedian host the ceremony. Jackman, a tiny bit rough around the edges, did an admirable job I thought. The multi-talented Aussie did more than you'd expect from a guy best known for his Wolverine action star status.

Jackman's opening number, a musical rundown of the Best Picture nominees made famous by Billy Crystal, was jokingly sparse because of the economy. The sets and props looked like something from Be Kind, Rewind. Since the Oscars are known for glitz and glamour, the joke came off as condescending. 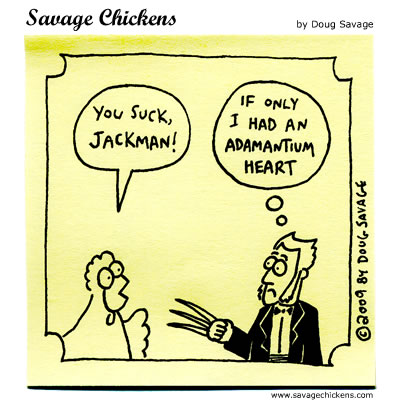 The first award of the night was Best Supporting Actress. The show's producers unveiled a very fresh style of presenting that would be repeated with each of the acting awards. They brought on stage five previous winners to talk about each of the nominees individually. You can tell it had a big impact on the contenders as an acting luminary such as Shirley MacLaine talked directly to a nominee about their performance. It left tears in their eyes and was a welcome departure from previous shows.

Next came the start of a theme for the evening. The trophies were presented in the order in which they go toward making a movie. Of course it all begins with a script. Steve Martin and Tina Fey presented the two awards and they killed. Theirs was perhaps the most memorable for the entire evening.

Jennifer Anniston and Jack Black presented the two animation prizes. In a "you just know they were going to do that" moment, the camera cuts to Jen's ex Brad Pitt and Angelina Jolie in the audience -- twice. It was incredibly tacky, but like a train wreck, I couldn't look away.

The Curious Case of Benjamin Button starts its near sweep of the technical awards winning for Art Direction and Makeup. In between those two awards, The Duchess wins for Costume Design. Wow, a period piece wins for its costumes! Will wonders never cease?

In presenting the Oscar for Cinematography, Natalie Portman and Ben Stiller come on stage. Stiller is complete in fuzzy beard and sunglasses. It was a hilarious snipe at Joaquin Phoenix if you were in on the joke that was his David Letterman appearance. It did detract some from those being honored but it's all about the entertainment, right? 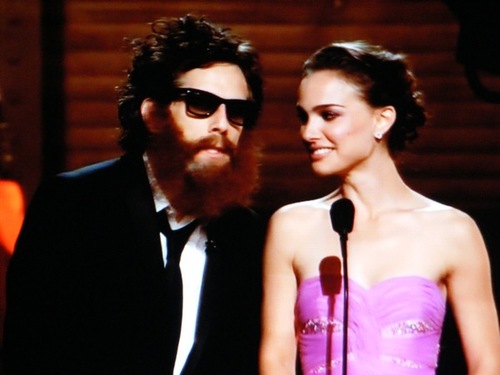 Seth Rogen and James Franco reprise their stoner roles in Pineapple Express for a montage of the year's biggest comedies. Instead, it was a repeated joke of them laughing at unfunny films like The Reader and Doubt. I expected more from Rogen.

Next comes one of the most anticipated awards of the evening, Best Supporting Actor. As everyone expected, the late Heath Ledger wins for The Dark Knight. His mum, dad and sister from Australia pick up the award. It's surprisingly without tears. His Mom said they are choosing to think about his accomplishments than their loss.

Bill Maher presents the documentary awards. Yeah, he did the nearly unpronounceable Religulous this year but his appearance was still awkward. Man on Wire won for the feature. Its subject, Philippe Petit, did a magic trick and balanced the weighty Oscar trophy on his chin for a few seconds.

The always great Will Smith quickly picks things back up with the action film segment. He gives out The Dark Knight's (shockingly) only other trophy for Best Sound Editing and more technical awards to Benji Button. When he steps over his own words, Smith inserts an impromptu "Boom goes the dynamite." It's a hilarious ad lib for nearly everyone who's seen the well-circulated clip.

Eddie Murphy hands out the Jean Hersholt Humanitarian Award to Jerry Lewis. I can't believe it took the Academy this long to recognize all that this man has done for Muscular Dystrophy. Finally, you got it right. Some much deserved praise for this extraordinary gentleman.

The music categories are next as John Legend steps in for prima donna Peter Gabriel. The producers seem to be in a hurry to showcase the whopping three songs up for Best Song and do a medley. Perhaps that's why Bruce Springsteen got grossly overlooked. He wouldn't mesh with these big performances.

Kate Winslet wins Best Actress -- finally. Can you believe this is her first Oscar win in six tried? In my mind she's won as many as Meryl. Or least she deserves as many.

In one of the biggest surprises of the evening. Sean Penn wins Best Actor for his performance as the homosexual San Francisco city councilman Harvey Milk. Robert De Niro gave the talk about him, "How did he do it? How for so many years did Sean Penn get all those jobs playing straight me?" In his acceptance speech, did give a nice shout-out to odds-on favorite Mickey Rourke. Nicely played, Sean.

Finally, with the night's biggest prize, the nominees are showcased with comparisons to classic films. It's akin to what they've done the acting awards but with celluloid instead of, well, human cells. Presenting the award is legendary Steven Spielberg. As we all expected -- and many of us secretly hoped -- Slumdog Millionaire wins.

It's proof that good guys do win in Hollywood. And it shows much the Academy -- and to a greater extent, the American people -- enjoy these heart-warming, rags-to-riches stories of triumphant underdogs.

I went into the night dreading this year's Oscars. But I'm actually glad I experienced it. It reminded me how magical the movies are. The show's producers promised a different type of ceremony and, for the most part, they succeeded.

For those of you who did watch, did I miss anything? What was your favorite moment from the Oscars telecast? Let us know.