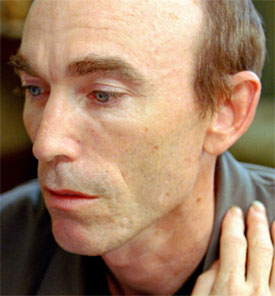 Jackie Earle Haley has always creeped me out. Even as a kid actor in The Bad News Bears he always seemed a little odd.

As a result, I think his official casting as Freddy Krueger in the Nightmare on Elm Street revamp is perfect. His inclusion has been rumored for a few months.

Everyone who saw Watchmen seems to agree that his (mostly) masked performance of Rorschach was the best. He'll make good use of the famous Freddy visage.

His career has been resurgent after earning an Oscar nomination for his chilling role in Little Children. My favorite role of his remains Moocher in 1979's Breaking Away.

Shooting on the new Nightmare (not to be confused with the excellent New Nightmare) begins next month in Chicago. It's slated for a April 16, 2010 release. Michael Bay's company Platinum Dunes is producing.

To whet your whistle, here is a fan-created teaser trailer for the remake.