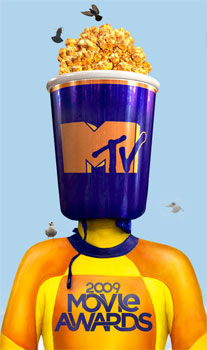 Big Oscar winner Slumdog Millionaire was second in nominations with six. Along Twilight and Slumdog in the Best Movie race are The Dark Knight, High School Musical 3: Senior Year and Iron Man.

The always playful awards show adds two new categories: Best Song from a Movie (why didn't the music network have this before?) and Best WTF Moment (surely you understand this acronym). One has to wonder why all of The Curious Case of Benjamin Button wasn't nominated in that latter category.

Below are all the nominees. Andy Samberg hosts this year's ceremony. It'll air live on May 31. Viewers can vote for their favorites now on MTV.com.

Best Song From a Movie

Do you have any interest in the MTV Movie Awards? Is it an equal to the Oscars yet? We'd love to get your opinion.