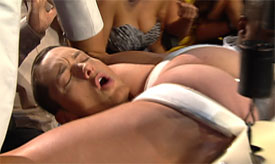 I have a love-hate relationship with the annual MTV Movie Awards. I love that it's irreverent and fun. I hate that it's become such a huge vehicle for promoting upcoming films.

When it started in 1992, it quickly became the anti-Oscars, thumbing its nose at stuffy old ceremony. Typically broadcast in May or June, the show has devolved into one big marketing event for summer movies. A fact the show's producers aren't even hiding any more.

This year is no different. In fact, the big news from last night's event isn't even who won or lost. It's a stunt that can be called offensive or hilarious, depending on your point of view.

Always the subject of controversy, Sacha Baron Cohen appeared high above the crowd as his flamboyant character Bruno -- with this butt barely covered. He was guided toward the stage where he feigned a problem and asked to be lowered to the ground. That's when he landed in a most uncomfortable position -- again, depending on your point of view.

He fell to the lap of Eminem, his head to the ground and his bare butt in the face of the rapper.

Eminem was none too pleased. He and his entourage picked up Cohen and forcibly shoved him away. Eminem and posse made a quick exit, apparently in disgust. Some have already argued that the prank was too well-choreographed to not have Eminem in on it. But then again, the all-too-serious Eminem had a run-in with Triumph the Insult Comic Dog at the network's 2002 Video Music Awards.

Personally, I thought the act was hilarious. Cohen -- whose movie Bruno opens July 10, naturally -- is a great comedic performer. He has a knack for pissing off people to hilarious effect.

The stunt has completely overshadowed any of the announced winners. Perhaps that's to MTV's benefit. The awards -- chosen by the public through MTV's web site -- honored Twilight as Best Movie of the year. Best movie over box office and supposed fan favorite The Dark Knight.

If that wasn't enough to get teen girls in a tizzy, a new trailer for the next Twilight film, New Moon, debuted during the show.

Below is the complete list of winners, as if they mean anything at all in the face of the blatant commercialism of the event.

Surprise, surprise. Turns out the whole Bruno/Eminem fiasco was staged. In fact, the event was rehearsed. Read the Reuters story for more.

Best Song From a Movie