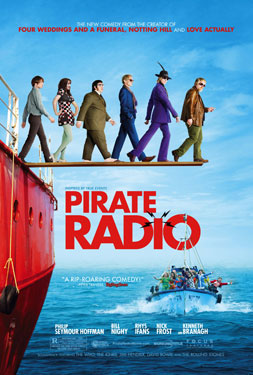 Rock 'n roll is at the heart of my most beloved movies. Flicks like Almost Famous, The Doors, Spinal Tap, Wayne's World, and Dazed and Confused are near the top of my all-time faves. The upcoming movie Pirate Radio is destined to be on that list too.

Check out the fun trailer below. As a bonus, you get to see a shirtless Nick Frost.

The film opened in England this past Spring to mixed reviews. It was released under the title "The Boat That Rocked." It'll get its U.S. release under the new title on Nov. 13.

Sure, the story of rock-infused youth rebelling against the conservative establishment is nothing new. But Pirate Radio looks to be one rockin' boat ride.