Hugh Jackman is out, and the Oscars host goes to... (Updated) 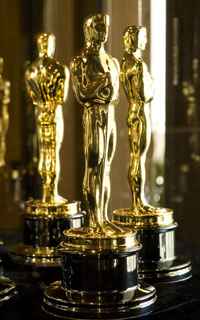 One thing is for certain. On March 7, 2010, Academy of Motion Picture Arts and Sciences will host their 82nd annual Academy Awards. The one thing that's not certain is who will host the biggest awards show of the year.

In case you haven't been following along, Hugh Jackman took his hat out of the ring for consideration as host and it's stirred the pot in terms of hosting duties for this year's show. In fact, it's almost become a bit of curse, the Billy Crystal curse.

We've decided to take the /Film question to heart and fashion a list of potential hosts that we would love to see host the event. Of course, this isn't a list of probable, or even likely hosts. No, this is a list of people that would force us to tune in and watch the program even in the wake of natural disaster.

Oh yes, this list is that good and we think you'll agree. Of course, we would love to see Neil Patrick Harris complete his "Doogie Slam" and host all of the major awards shows in one cycle (ala the Tiger Slam, but not in the same calendar year), but given his show's tie to CBS and the fact that ABC practically owns the Oscars, the likelihood is slim to none.

With this in mind, here is our list in no particular order. The only rule we held ourselves to was not to include anyone who has hosted the Oscars before.

So, how did we do? Tell us who you could choose to host the Oscars.

Update: And the winner is...

In case you missed the announcement, Alec Baldwin and Steve Martin have been tapped to co-host next year's ceremony. Both gents are extremely talented and usually very entertaining but I'm not exactly sold on the combo.

I do like both men's comments in the official AMPAS press release:

"I am happy to co-host the Oscars with my enemy Alec Baldwin," said Martin.

"I donât play the banjo but I'm thrilled to be hosting the Oscars -- it's the opportunity of a lifetime," said Baldwin.

I wonder if Alec will find a way to get all his acting brothers on stage for the event.