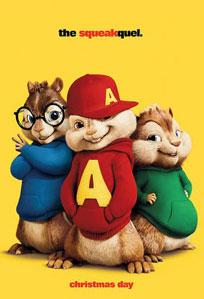 Twenty films have been submitted for consideration in the Animated Feature Film category at next year's Oscars. Under rules for the category, a max of five will actually be nominated.

According to the Associated Press, 20 is a record number of submissions in the category. The previous best was 17 in 2002.

The list includes some clear favorites including Up, Coraline, and Fantastic Mr. Fox. The inclusion of the upcoming animated/live-action Alvin and the Chipmunks: The Squeakquel is a surprise since the film is mainly live-action like the first one.

Another surprise is Tinker Bell and the Lost Treasure. The movie is considered a direct-to-video release by most but must have had the necessary theatrical release shortly before its Oct. 27 DVD/Blu-ray street.

Here are the 20 films up for consideration:

No indication of quality is inferred in these submissions. They simply have been submitted by each film's producers and meet the necessary requirements. Obviously if they were submitted, the studio thinks the movie is good enough to at least be nominated.

This is a precursor to a much larger and pointed opinion piece I plan on posting here in the next few days. If you have any comments in regards to animated films and the Oscars, I'd love to hear them. Send them to me. I'll include as many of your viewpoints as possible.