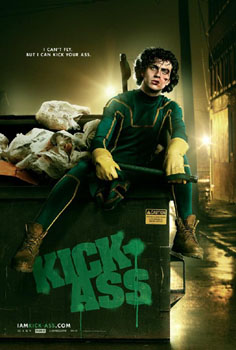 Have we reached a point of saturation for comic-related movies? The results at the box office seem to point to no.

With that in mind, it's not very surprising that it feels like every other news story we post is related in one way or another to a comic movie. The latest comes in the form of comic book turned feature film Kick-Ass.

The basic plot revolves around a comic book geek who self-fashions himself into a superhero vigilante without any real super powers. Of course, that would be Batman, but in Kick-Ass the titular character doesn't even have the luxury of "all those wonderful toys."

MySpace scored the scoops this week with both the poster (right, click for higher res on their site) and the trailer (below). I'll be honest, while it has the potential to fall into the horrible realm of mock superheros ala Mystery Men, I think the tone of the trailer indicates that we'll be in store for something a bit more interesting.


And yes, for those of you convinced that Nic Cage would've made a great Superman, that is him in the role of Big Daddy. So, it seems that he got his chance to don some tights after all.

What do you think of Kick-Ass? Also, is it time we retire the comic book movies altogether?