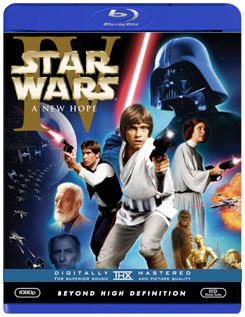 I'll admit I'm still a novice when it comes to Blu-ray. I received my first Blu-ray player (in the form of a PlayStation 3) this past Christmas. Silly me, I've been using the device to play games rather watching than movies in their optimal format.

Even though I'm a relative newcomer to Blu-ray, I do have a few worthy discs. There are also a number of Blu-ray movies I wish were available in the format.

Movie blog Screen Rant has posted a list of 10 great films that really deserve to be on Blu-ray. Their neglected films shine a bright light on the glaring holes that exist in Blu-ray's catalog.

Here we go. Go to Screen Rant for their full explanation on each movie in the line-up. They even list specific scenes in the films which would best take advantage of Blu-ray's superiority.

Yeah, with the exception of Once Upon a Time..., it's a pretty obvious list. The real stick-in-the-mud here is Steven Spielberg of course. He accounts for four of the 10. I'd like to know what's keeping him from giving his blessing.

Here's where we come to the rescue -- sort of. By clicking on each of the links above, you can sign up to be notified when each of these movies/series is announced for Blu-ray release. You'll be among the first to know when these sought-after films are made available for your 1080p viewing.

Are there any films that Screen Rant forgot to include? Personally, I'm dying to see Seven on Blu-ray. Let us know your thoughts.