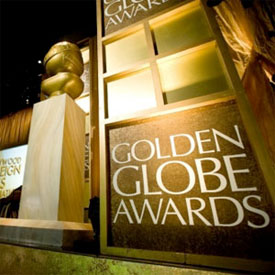 The Hollywood Foreign Press Association (HFPA) gave out its Golden Globe awards last night at a lavish ceremony. The prizes for TV and film performances are somewhat secondary to what went down at the event.

Host Ricky Gervais skewered Hollywood royalty during the whole evening. His scathing jokes made fun of the night's biggest stars. You can sample his brand of humor from the opening monologue.

It may have been mean-spirited for Gervais and his writers to ridicule celebs but, really, who deserves it more than them? Keep in mind that Jennifer Lopez wore a reported $5 million in jewelry to the event. (Reuters' Tim Goodman seems to agree with me and says it better than I could.)

But, hey, how about those winners? The Social Network and Glee were the night's big winners. Glee pulled down three of the tiny trophies while the Facebook movie earned four.

Here are all the categories and their winners.

Best Actor in a Television Series - Comedy or Musical

Best Actress in a Television Series - Comedy or Musical

Best Miniseries or Motion Picture Made for Television

Best Actor in a Miniseries or Motion Picture Made for Television

Best Actress in a Miniseries or Motion Picture Made for Television

Sure, recognition from a group of overseas critics is good but the trophies don't hold a candle to the prestige of the upcoming Oscars. The nominations for the Academy Awards will be announced bright and early Tuesday morning, Jan. 25, with the event itself to follow on Feb. 27.

One last personal postscript from last night's Golden Globes. For years you've read of my colleague John's adoration for Natalie Portman. He's mentioned his love for the beautiful actress many times. Specifically, here, here, here, here, and here -- just to name a few.

After her "nerd laugh" while accepting the Best Actress, Drama award, he has publicly dropped his obsession. I must agree it was a little off-putting from the usually elegant performer.

(Yeah, I don't believe he's fallen out of love with her either. A couple of repeat showings of Closer and he'll be back on the bandwagon.)