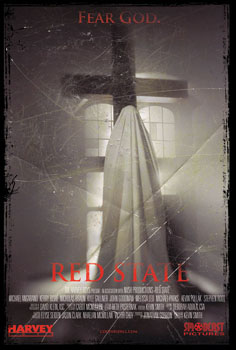 We all know how writer-director Kevin Smith feels about sex. You can pick out any of his previous 8 movies that he's written and directed and it won't take long to pick up on his open sexual mores. After watching Dogma, I think it's safe to draw some conclusions on religion too.

But, with Red State, we are given a rare first look into the director's political side. Much like the Holy Trinity revered in most Christian religions, Sex, Religion and Politics form the holy trilogy in Red State and Smith pulls no punches with any of them and let's the viewers draw their own conclusions like any good filmmaker should.

I should probably pause right here and give out a few customary caveats. First, I am a huge Kevin Smith fan, as those of you who have been around for a bit can attest, and it would take some serious work for me not to like one of his movies. That being said, you have to realize that I traveled out to L.A. out of my personal pocket for this blogger screening and carried some very high expectations with me. If the movie didn't deliver or failed to live up to these lofty expectations, I will tell you.

Second, Red State doesn't open in theaters nationwide until October 19 and I realize that most of you won't be able to see it until then. I will try to write as honest of a review as I can without revealing major plot points and twists so as to give you a fair review, but also to insure that you see the movie as untainted as possible.

There was a week between Red State's debut at Sundance and our screening. It was extremely challenging to avoid spoilers and reviews working in this business every day, but somehow I was able to do so and I couldn't be happier that I did. So, I hope this piece will give you an idea of what to expect without spoiling anything. 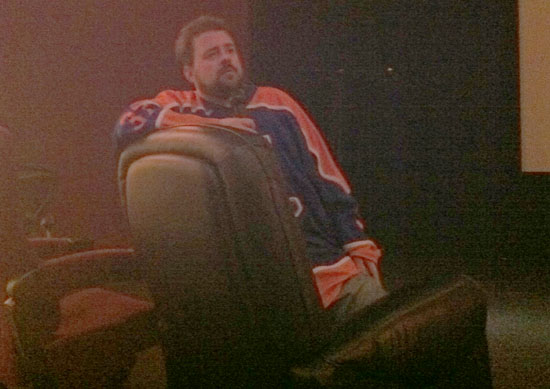 But, be forewarned, if you want to go in completely clean, stop reading right now and hit back on your browser. There are just some things that have to be disclosed when talking about this movie and I can't change that.

I am going to say this right off the bat so that no one can accuse me of simply being a fan boy with no objectivity, this movie is by no means perfect. But, no film is perfect. You can objectively critique Citizen Kane or Casablanca and find flaws.

While it's not perfect, Red State did deliver the goods where it matters most. As soon as the movie was over, I wanted to talk about it with others. I saw it on Friday and here it is on Monday and I still can't stop thinking about it.

This is not your older brother's Kevin Smith. As much as I enjoyed Kevin's previous 8 movies, they weren't movies that haunted you. They entertained you, sure. And they are always great to throw in and watch every now and then, but I don't wake up at night pondering Banky Edwards' lot in life as a tracer.

Red State will haunt you. No matter what political or religious beliefs you have going in, Red State will leave you questioning the evils of excess.

Kevin breaks Red State into three acts Sex, Religion and Politics (Government) and even handles the credits along the same lines. The film starts out in the realm of sex as three teen boys set out for an evening of sexual excess thanks to an Internet ad promising a night of debauchery. It's like the opening of Porky's gone terribly wrong.

The second act is all about Religion and here is where the film really shines. Michael Parks takes center stage as Abin Cooper, a Fred Phelpsian character that is straddling the line between a sociopath and a religious zealot. While Parks' sermon is the centerpiece of the movie and will surely garner him some awards recognition (if there's any justice in the world), it's his complete immersion into the character of Cooper that is truly amazing.

For instance, the one line from Michael Parks that was the creepiest for me was, "Can you get me some iced tea?" I realize that this seemingly innocuous request doesn't scream horror, but trust me, in the context of the movie, this line is pure Abin Cooper and you realize from this one line just how crazy and committed he is to his beliefs.

The third act is about Politics and John Goodman takes the face of the Government as an ATF agent who is tasked to contain the Five Points church that Abin Cooper presides over. Again, it's hard to get into specifics without giving away too much about the movie, but suffice it to say, the movie takes place in a post 9/11 world and the Patriot Act is used as a prime example of governmental excess.

All three acts come together in a brilliant way that allows Smith to point out the evils in excess of all three without picking sides. The ending has a great twist that really was unexpected and brings a conclusion to the story that satisfies without being preachy.

Despite not being preachy, there are real messages and themes at play. And like all good lessons, the themes linger with you long after you leave the theater. They are like a lesion on your skin that itches. You scratch at it over and over again thinking that each scratch will be the one to make it go away, but then it comes back when you least expect it. 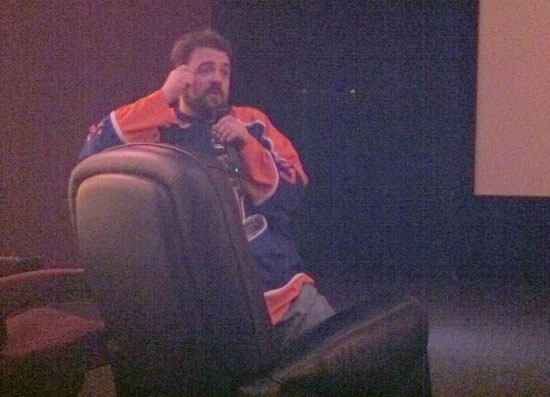 While many will dispute Smith's claim that Red State is a true horror movie, for me it lives up to its billing because after watching it, you realize just how eerily close the events in the film mirror society. The horror isn't in the sheer number of kills or gallons of blood (but trust me there's plenty of them there to creep you out), but in the sheer terror of the reality of the movie.

Don't get me wrong, the movie is entirely fiction. But, then again so is The Texas Chainsaw Massacre and yet real people such as Ed Gein exist. Real people like the Five Points clan exist too and the terror lies in knowing that the next tweet you get from Breaking News might just mirror this movie a bit too much.

The truly horrific part is that the excesses of Sex, Religion and Politics have never been greater in society than they are right now. What if the movie undersells the potential impact that these excesses? Now, THAT is truly scary.

You don't have to wait until October 19 to see Red State. Kevin is taking the movie on the road with him to a select few venues in March and April. The evening will start with a viewing of Red State and end with one of Kevin's trademark Q&A sessions.

You find the complete Red State tour information by clicking here. You can also request a screening in your hometown on that page, so check back for the most up-to-date schedule.

In the meantime, if you see Red State on the tour or just want more information or have specific questions, feel free email me directly and I'll be happy to discuss the movie in more detail.