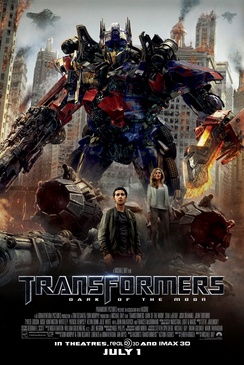 It's been said around here a million times, but I'll say it again. I feel that 3D movies is quickly ruining everything that is good about seeing movies in theaters.

I know that most of you probably think that I despise anything in 3d, but that's not true. I do think that it's a useful technique that, when used sparingly and appropriately, actually adds to your viewing experience. Case in point: Avatar.

Avatar was a movie conceived, developed and filmed in 3D. I really don't think that movie would have had half of the impact that it did without it, but I also loathe it for that very reason. Now, studios feel as though every movie ever made needs to be in 3D, usually for no other reason than to reap the rewards of higher ticket costs.

I mean really, do we NEED to see The Hangover Part II in 3D? No, of course not. And thankfully, filmmakers abandoned plans for a 3D version, but they strongly considered it and I'm sure Warner Bros. encouraged it.

Of course, one of the nefarious little off-shoots of the proliferation of 3D movies is something that we should have seen coming: 3D movie trailers. What better way to show off all that gimmicky crap than by picking out all of the 3D parts and putting them into a 2 minute clip.

Heck, at that point, why even go see the movie in 3D?

To compound the problem, studios are starting to release the 3D trailers online in 2D in some sort of misguided attempt to market the movie by throwing all the marketing crap against a wall and seeing what sticks.

Two such trailers have made their way online courtesy of Yahoo! Movies for Transformers: Dark of the Moon and Green Lantern which you can view below.

You can tell even in the 2D environment, which clips and pieces are meant to be in 3D. It might just be me, but I find them distracting in a trailer. Heck, I found them distracting when my fiance and I went to go see Pirates of the Caribbean: On Stranger Tides this past weekend at the drive in.

If I had to see Blackbeard's sword jab out at the camera in a blatant attempt at a 3D trick one more time, I was going to shoot somebody. So, what should studios do with these 3D trailers made specifically for showing in front of 3D movies?

Well, according to this article, Samsung is starting to stream 3D trailers to their 3D equipped TVs. Of course, that opens up another whole can of worms and my hatred of 3D TVs, but I digress.

What I would like to know though from someone who has streamed a 3D trailer to their 3D TV how long it took to download/play the trailer. Given the complexity and size of native 3D film, I would imagine that it would take much longer than the 2 minute trailer.

Let us know what you think of 2D versions of 3D trailers and/or if you've streamed a 3D trailer on your 3D TV.