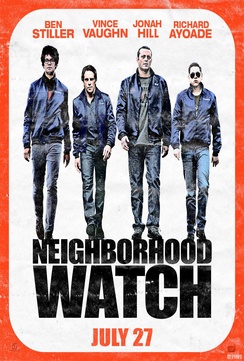 One film that I hope doesn't get lost in the big battle of Summer blockbusters is the movie formerly known as Neighborhood Watch. The film was re-titled simply The Watch a few weeks ago in light of certain current events.

The studio went to great lengths to distance itself from the shooting, but it was called Neighborhood Watch and one of its posters was riddled with bullet holes. So, if the competition wasn't stiff enough, now it faces the added burden of audience confusion over the name change.

The one, or shall I say two, things that it does have going for it are the recently released trailers which are actually surprisingly different for two trailers dropped in proximity to one another. The green band trailer really plays up the alien invasion angle that drives the movie.

While the red band trailer is as you would expect, a bit raunchier. While the trailer above make the movie look like it could pass for Men in Black 4, the below trailer clearly shows that even though the film hasn't been rated yet, it's clearly in R territory.

From these trailers, I'm getting a real Burbs meets Men in Black vibe with a whole lot of cussing thrown in for good measure. Just how I like it.