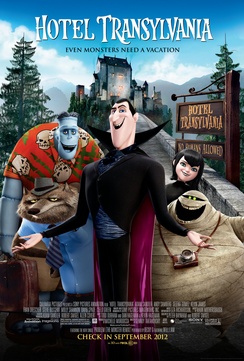 Just when you were ready to throw in the towel and pronounce the time of death for the box office, in steps in Adam Sandler to the rescue? As amazing as that seems, it's true. Well, at least his voice stepped in.

In what many thought would continue the downward spiral of box office misery, this weekend's offerings didn't seem to be anything special. But as proven time and time again, the box office is an enigma wrapped in a riddle.

Elsewhere around Hollywood, the studios continued to position their awards hopefuls with a rash of new trailers and posters to ensure that their films stay fresh in the minds and lips of the Hollywood elite. The NFL ended their long labor relations dispute with the Referees Association which prompted something that you never thought you would ever see, standing ovations for the officials.

On the star front, there was actually some reportable news to share as well. Go figure that it's MMM favorite Lindsay Lohan making noise on the weekend. That goes together, well, like Mondays and the MMM. Sit back and enjoy as we get our stir on.

While Adam Sandler's live-action films continue their free fall, he continues to prove that his unique dulcet tones are still good enough to draw a crowd. Hotel Transylvania had no vacancy this weekend as it set a record for the biggest September opening with $43 million.

Now granted, it's nowhere near The Avengers and its $200+ million all-time record opening, but for September, it's unheard of as it bested previous record holder Sweet Home Alabama by 21%. For those of you hoping that his recent live-action bombs would signal less Sandler at the box office, Box Office Mojo points out that this is his second biggest opening ever, trailing only The Longest Yard's $47.6 million.

While Hotel Transylvania's success alone would be newsworthy, another newcomer Looper held its own in second place with $21.2 million. The science-fiction, time-traveling actioner featured Joseph Gordon-Levitt playing a hit man who kills people that the mob of the future sends back in time. Everything is going well until the mob sends back his Gordon-Levitt's future self played by Bruce Willis.

I'm a big fan of director Rian Johnson, so it's great to see that his film is being so well-received.

In other box office news, Pitch Perfect proved that people just can't get enough Glee as the Anna Kendrick choir comedy opened with %5.2 million on only 335 screens. At $15,522, that was easily the best per screen average of the top 15.

At the other end of the spectrum, Won't Back Down had one of the worst per screen averages earning only $2.7 million while opening on 2,515 screens. To give you some perspective on just how anemic the box office has been of late, Hotel Transylvania's $43 million this weekend is more than the cumulative total of every single film in the top 15 save for The Possession's $47.4 total to date.

Adele is a Bond Girl

It is perhaps Hollywood's worst-kept secret, but singer Adele all but confirmed that she's singing the title track for the upcoming Skyfall when she tweeted out a picture of sheet music for the film. The rumor is that the track is titled "Let the Sky Fall."

The British singer joins an illustrious group of singers so tasked with ushering Bond into action. While there are certainly some A-listers in the group such as Madonna, Paul McCartney and Tina Turner, there are also some forgettable turns from the likes of Lulu, a-ha and Garbage.

Here's hoping that Adele's offering ends up in the former group.

According to Rolling Stone, now that the cat is out of the bag, the single will debut on Friday.

Adele will debut her James Bond theme song for #Skyfall on Friday: bitly.com/QGGXr5

I have to admit that I've never seen a single frame of any of the Paranormal Activity movies before watching this trailer. I think it's my general disdain for the whole "found footage" genre, but I know that this series of films is popular.

What I do like here is the play of the Xbox 360 Kinnect. I'm a big fan of the Kinnect, but I didn't know it could project all of those pin points of light. It might just be a camera trick for the film, but if anything I'm going to try and recreate it on my Kinnect later.

So, there's that. Paranormal Activity 4 will start scaring you on October 19 in plenty of time for Halloween.

Normally, I'm not a big fan of the whole adding "-gate" onto things to make them sound more interesting than they really are, but this latest Lindsay Lohan affair has all the earmarks or earning the "-gate."

According to New York Daily News, the young actress got mixed up with a congressional aide Christian LaBella and a case of "She said/He said" broke out. According to the report, the pair were out partying in New York and Lohan invited the young man back to her hotel.

Once there, she was allegedly going through some of this cell phone pictures and she became upset after seeing some pics of herself on the phone. Lohan claims that LaBella then got violent and started to choke her.

Lohan pulled a fire alarm and when the police arrived they arrested LaBella on misdemeanor assault charges, but they were dropped within hours. Naturally, I can't claim to know what went on, but as wise people have been saying for years and years, no good happens after midnight.

On that note, I will let you get on with your day, but check back later as we have news on who is hosting this year's Oscars and some rather bouncy shots of Jennifer Lawrence in her new trailer. Until then, mix well!