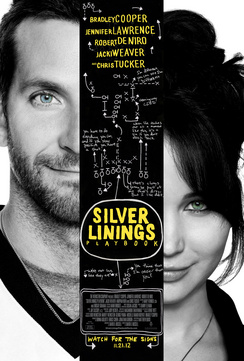 Let's face it, with the mega success of The Hunger Games, actress Jennifer Lawrence is one of the hottest commodities in Hollywood these days. Apparently, she has a new movie coming out next month called Silver Linings Playbook.

Now, this is a film that stars current comedy IT actor Bradley Cooper and legend Robert De Niro among others. And yet, here it is a month and change from release and it barely even registers a blip on my highly tuned box office radar.

Well, that all changed when I saw its second trailer today. Apparently there was a first trailer, but I missed that too because well, to be frank, it was a pretty boring trailer.

If I were any less of a man, I would simply point out that the new trailer features a much bouncier Jennifer Lawrence with a strategic close-up shot of her cleavage freckles and bare back, but I'm much more multidimensional than that. The bottom line is that the new trailer is just edgier and riskier on all fronts - and backs!

In the first trailer, Bradley Cooper was presented as a loveable, yet flawed character, but in the second trailer he's beyond dangerous. The potential for extreme volatility between his and Jennifer Lawrence's character raises the stakes that much more.

In the end, it's a pretty good case study in how even subtle differences between trailers can elicit huge differences in opinions. Had I not seen the new trailer, I probably would have simply dismissed Silver Linings Playbook as just another romantic comedy.

When, in fact, it looks to be anything but. Also, there's a Chris Tucker sighting in this film, so that's worth the price of admission alone. The man hasn't starred in a non-Rush Hour film in the last 15 years. No seriously, look it up.

In case you missed it like I did, I included the original trailer for Silver Linings Playbook to compare to the new one.