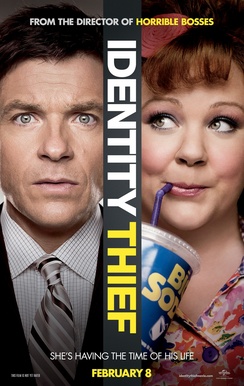 If you're on the East Coast, I can probably summarize your weekend up in one word: snow. However, if you were anywhere else, it seems, you had a beautiful weather weekend and who knows how crazy things got this weekend.

One place where things got a bit out of control was the box office. It was both a great weekend and a downer.

But that's life. You take the good, you take the bad and then you make lemonade. Or something like that.

Whatever the case may be, sit back and grab your morning coffee and let's see what Nemo brought in.

First, the good: Identity Thief cashed in with over $36 million dollars making it a strong debut for a February title and easily the best opening of the last two months, since The Hobbit debuted.

Now, the bad: the weekend, as a whole, was off last year's number by almost 50% when both The Vow and Safe House opened up one, two with over $40 million each. Journey 2: The Mysterious Island didn't do too poorly either in third place with a $27 million debut.

While much of the East coast was stranded thanks to Nor'easter Nemo, I think it's safe to say that the weekend was a success overall. The real test will come this upcoming weekend with the latest Nicholas Sparks romancer going head-to-head-to-head with the latest Die Hard movie and, allegedly the next big Twilight like thingy.

While Identity Thief was having a good weekend, Steven Soderbergh was not. Despite having yet another star-studded cast in place for his latest film Side Effects, the film struggled to break $10 million in its opening weekend.

Sadly, Soderbergh has once again proclaimed that this will be his last film ahead of retirement. Of course, he's said that five times now, so it's anyone's guess if it will stick this time.

Elsewhere, Silver Linings Playbook continued its strong Oscars-aided run. It should surpass $150 million this weekend, which also happens to be the film that the Mrs. and I will be checking out for our Valentine's date. Also, strong confirmed unable to share reports has Silver Linings Playbook moving to a late April street date. I had a feeling this would happen, especially with the uptick in business the film will most likely receive after the Oscars.

After 27 years, Top Gun nearly re-entered the Top 10 films at the box office when its 3D re-release brought in $1.9 million. While the feat is impressive, I'm pretty sure that the head honchos over at Paramount were hoping for significantly bigger business.

Perhaps this will serve as warning shot to Hollywood that the 3D well is all dried up. Probably not.

'Monsters' get scary in new trailer

One of the movies that I'm looking forward to the most this Summer is Pixar's Monsters Univeristy. It's the prequel to Monsters, Inc. and covers the period when Mike Wazowski and James P. Sullivan went to college to learn all of their scare tactics.

Up until this weekend, not much had been released on the film, but this new trailer is the full-length trailer that we've all been waiting for. It really looks like this second installment will stay true to the themes of the first movie and yet still carve out its own little niche.

Boy band gets "supersized" in trailer

So yeah, I despise boy bands. I think they are everything that's wrong with the music business that isn't named Taylor Swift.

So, earlier in the year, Tim and I were laying wagers as to which film would be worse, Never Say Never or the then Untitled One Direction film. Needless to say, but it ended in a draw.

Well, the trailer for the One Direction film, which is now going by the moniker 1D3D (oh gag me with a spoon), released this weekend and one bit of information caught my eye. The music documentary is directed by none other than Morgan Spurlock.

That's right the man behind Super Size Me and POM Wonderful Presents: The Greatest Movie Ever Sold is directing what until now I thought was nothing more than a puff piece created to get tween girls into the megaplexes at record numbers.

So, after watching the trailer, am I more apt to see the film? Probably not, but I am curious as to what direction (get it?) that Spurlock takes the film. It should be interesting and that's saying something.

That's all that we have time for this week, but I hope you enjoyed the Mixer. We'll be back next week with even more awesome goodness.