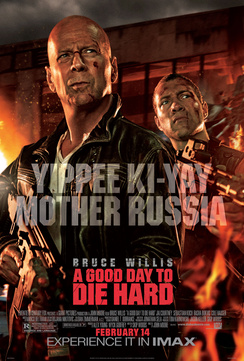 Death, taxes and the inevitable success of a Die Hard film. It seems that some things truly are inescapable, despite it being completely irrational.

This one is a total head-scratcher though as the film was roundly panned by critics (currently weighing in at a terrible 16% fresh on Rotten Tomatoes), released during the Valentine's Day weekend as counter programming to traditionally over-performing romantic dramas and yet, Bruce Willis continues to defy the odds-makers.

He is perhaps as close to a real life counterpart to Jason Voorhees that we have. He can be beaten down and occasionally slowed a bit, but you can never kill Bruce Willis.

Over the weekend, the wife and I opted for a more traditional Valentine's Day movie when we took in Silver Linings Playbook and we couldn't have been happier. So, whether you were looking for love, explosions or just a chance to get lucky, this weekend was for you. We take a look back in this morning's MMM.

As we hinted at above, it was indeed a box office from Russia with love as A Good Day to Die Hard took the top honors with $25 million. The latest John McClane action film held last week's champ Identity Thief in check and has actually locked in $33 million as it actually opened on Valentine's Day.

Another Valentine's opener, Safe Haven worked more traditional waters to score $30 million since Thursday. The latest Nicholas Sparks novel turned into a sappy romantic drama with lots of face holding, Safe Haven is performing just below the business that last year's Sparks entry The Lucky One did. That film ended with $60 million and I would think that we'd see the same sort of steep drop-off here.

If I had to guess, Safe Haven is going to struggle to break the $60 million barrier and will end with about $55 million.

Other newcomers included Escape from Planet Earth and Beautiful Creatures. The former landed right in line with expectations with $16 million, while the latter severely underperformed with only $10 million since its Thursday debut.

Elsewhere, Silver Linings Playbook eased its way to the magical $100 million mark and it should surpass that marker before the first Oscar is given out on Sunday. Zero Dark Thirty has an outside chance at also hitting $100 million, but it will most likely need a post-Oscars bump to attain that goal.

In perhaps the worst-kept "secret" Hollywood, Latino Review made it official when they broke the news over the weekend that Harrison Ford has signed his deal to return as Han Solo in Star Wars: Episode VII.

Late last year, it was reported that the three main actors Mark Hamill, Carrie Fisher and Ford would be reprising their characters from the original Star Wars trilogy. Carrie Fisher even spilled the beans a bit by confirming that she was coming back, despite there being nothing official from LucasFilm or Disney.

By far though, the hardest get would have been Harrison Ford who has been reluctant over the years to go back to his Star Wars past. I think after this news, more dominoes will fall and we'll get some quick official casting news and confirm who is or is not returning from the original trilogy.

So, what about John Williams?

In what is quickly becoming yet another Star Wars-centric MMM, I know that some of you are wondering whether composer John Williams will return for Star Wars: Episode VII. Williams' score for Star Wars is probably the most recognizable musical score for a film of all time and he's been involved with each of the six movies.

But, George Lucas is no longer in the decision-making seat and does that mean that Williams could be on the outside looking in? I think so, at least from the following comments that were posted on the John Williams Fan Network.

The quote was from Williams himself who was conducting the Young Musicianâs Foundation Debut Orchestra on February 9.

Weâre about to play Star Wars [audience interrupts with cheers] and each time we play it, Iâm reminded of the first time we played it decades ago. Neither I, nor George, nor anyone else involved thought this would go far or in a few years there would be a sequel and Iâd have to revisit the themes... and years later another trilogy. Now weâre hearing of a new set of movies coming in 2015, 2016... so I need to make sure Iâm still ready to go in a few years for what I hope would be continued work with George... [more cheers].

While at face value, they seem like positive remarks that Williams is indeed interested in working on the new Star Wars films, the troubling part comes at the end when he says that he hopes to continue working with George. Everyone who is even tangentially following the new trilogy news knows that George Lucas is out and J.J. Abrams is in.

Now, perhaps this was simply a slip by the conductor, but I personally think it's more telling that he's on the outside looking in right now. Of course, being at least two years out from a finished product, I don't think they've nailed down their composer yet, but I do think they are talking about it.

As any J.J. Abrams fan can tell you, Michael Giacchino is his go-to composer, much like Williams was the go-to guy for Lucas and Steven Spielberg. In fact, Giacchino was the composer for Abrams' film Super 8, which was produced by Spielberg.

And let's face it, aside from the "Duel of the Fates" apologists, it almost felt like Williams phoned it in for the prequel trilogy. However, I still think that John Williams has to be involved.

I envision a situation where Williams and Giacchino both work on the score and they heavily sample the scores from the original trilogy. To be honest, this excites me greatly, because I'm a huge Giacchino fan and I think he could completely breathe fresh air into the sound of the franchise, much like his buddy J.J. will do from the director's chair.

What do you think?

Well, that's about as much stuff as I can squeeze into this week's MMM. Until next week, mix well!