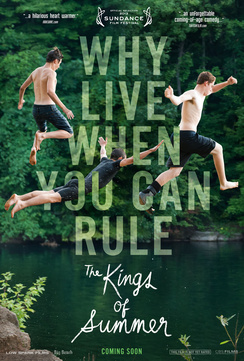 I sure do love my job. Let's face it, I don't have to deal with the stresses of brain surgery and I get to enjoy a couple of my favorite things all day, movies and the Internet. One of my favorite parts of my day is when Tim and I wax intellectually (or more often not) about some aspect of films.

You see, we are both very similar in our tastes and upbringings, but we differ enough that sometimes the debate can get a bit heated (relatively speaking of course). For instance, yesterday we were in stark disagreement over the genius of Lincoln. Tim didn't care for it too much and even went so far as to call Daniel Day-Lewis's Academy Award-winning performance as our country's 16th President as nothing more than a caricature of the man himself.

Luckily before it came to blows, 10 paces and a couple of old timey guns, we got over our differences and made up. I'm sure it probably had something to do with some new Alison Brie pics or something.

But one thing we don't disagree on is our love for coming of age films. They are simply guilty pleasures for both of us. I know where my passion for them began, it was growing up in a home with HBO and parents who weren't exactly too mindful of what we watched, especially late at night. I'm sure Tim has his own reasons for loving coming of age films, but he can get into those at another time.

So, we were chit-chatting this morning and throwing trailers back and forth as we normally do and we realized that there are an abundance of coming of age films coming out this Summer. It's like the sub-theme of the Summer, after comic book movies of course.

First up is a film that actually opens up next Friday and is one that you should seek out. Mud stars Matthew McConaughey as a drifter who lives on an island in the Mississippi River and befriends two boys. He regales them of his life's tales and while the stories are too fantastic to be real, the boys suddenly find themselves in the middle of an all too real manhunt for their new friend.

You're going to hear the phrase "this year's Stand By Me" a lot in the next few months, but I think you'll agree that this film might come a lot closer than the rest.

Matthew McConaughey has really come a long way since he starred in that other iconic coming of age film Dazed and Confused hasn't he? There are early whispers that McConaughey might even scare up another Oscar nomination for this role. As Wooderson would say, "Alright, alright, alright."

The next film hits theaters on May 31 and is titled appropriately The Kings of Summer. This film is a more traditional coming of age story where three boys spend a summer building a house in the woods and living off of the land in an attempt to escape the "oppressive" conditions of living with their parents.

It's every kid's dream come true to build their own house and move out from under their parents' tyrannical rule. I imagine that in true coming of age fashion, the kids learn a lot about themselves and come to realize that living with their folks isn't as bad as they once thought.

What I like about The Kings of Summer is that it's chock full of new faces. I don't really recall seeing any of the boys in anything before and I think that gives the film a nice fresh appeal. Tim is looking forward to it for one reason and one reason alone, Alison Brie. I can't really blame him.

The last film opens up over Fourth of July weekend and looks to have the greatest box office potential despite opening up against The Lone Ranger and Despicable Me. The Way, Way Back is your typical kid alienated by his parents seeks out his place in the world amongst new friends that better understand him.

Tim thinks this looks a lot like Meatballs and I can't really argue with him there. Personally, I see a lot of Adventureland in it and I can only hope that it succeeds where its predecessor failed in delivering on high expectations.

The cast is top notch and love Sam Rockwell in this role. Also, I dig Steve Carell as the bad guy and that's saying a lot because I don't dig Steve Carell in much of anything. This trailer also has plenty of women in bikinis and there's definitely nothing wrong with that.

Of course, it did make me feel a bit awkward when I realized that the kid's lead love interest was played by the now barely legal AnnaSophia Robb. When did the girl from Because of Winn-Dixie grow up? I feel old and awkward, but mostly awkward.