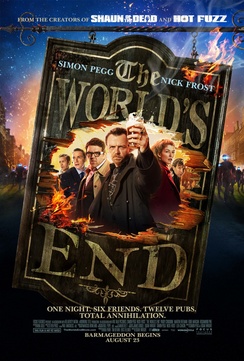 You may recall that I wasn't blown away with the first trailer for The World's End. Of course, you'll also remember that I left the piece on a hopeful note, putting my faith in the usual suspects of Edgar Wright, Simon Pegg and Nick Frost.

It seems that after watching the second trailer (or first full-length trailer), that my worries were all for naught. We delve a bit deeper into the plot and get many more comic gems than before.

Naturally, this is exactly how it's supposed to be. A good film will reveal a little bit and then a bit more up to its release. The best films will leave enough unseen to still provide plenty of laughs and surprises and I suspect this will be the case for The World's End.

It seems that the mysterious beings have also been revealed to be robots and not aliens, so that takes out a bit of The Watch comparisons, which can only help the film. The World's End is still slated for an August 23 release, which is exactly one week before the due date of our second baby. So, it seems I better get out opening weekend to watch it if I want to see it any time before the new year.

You may have noticed in the upper right that the lads also released their third poster for the film. I must say that like the trailer, this poster is also a marked improvement over the other two.