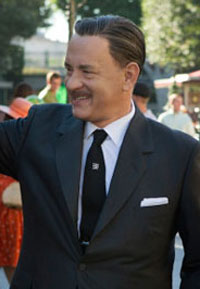 When you've got hot new movie starring Tom Hanks and Emma Thompson, there's a pretty good chance that it will make some waves come Oscar time. After seeing the first trailer for Saving Mr. Banks, there's nothing to make me believe this won't be the case for this film as well.

The only question that remains is whether they will submit Hanks in the Best Actor or Best Supporting Actor category. There's little doubt that Emma Thompson, portraying Mary Poppins author P. L. Travers, is the lead in the film about the trials and tribulations that Disney went through to finally realize the film on the big screen.

However, when it comes to Hanks, who is filling the incredibly large shoes of Walt Disney himself, it remains to be seen how much screen time he will actually have. The trailer below makes it appear that Hanks will be the driving force of the picture, but as often is the case, looks may be deceiving.

The film looks interesting and it appeals to me because I have a natural curiosity about the inner workings of Hollywood. Stories that look behind the scenes of the studios will always pop up on my radar. I think that the fact that this story centers around Disney and the incredibly secretive Walt Disney, there were will be plenty of curiosity to go around.

Saving Mr. Banks hits theaters on my mom's birthday, December 13, just in time for the height of awards season.