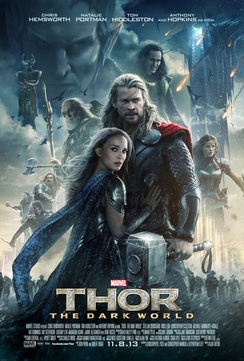 How big is the Marvel universe on the big screen? Well, it takes an iconic song popularized by an iconic folk group to even do this weekend's performance any justice.

This weekend signaled the start of what I like to call the final push of the year at the box office. Each week from here on out, it will be a Titanic struggle between arthouse and commercial films, doing battle for your hard-earned dollars. The last six weeks of the year are unlike any other during the year because big family blockbusters are as prevalent as smaller awards-caliber films.

This weekend, Thor fired the first shot and it was a shot befitting an Asgardian God. But, he wasn't the only one making thunderous headlines. Sit back, grab a cup of joe and enjoy the MMM.

Thanks to The Avengers, it was pretty much a given that Thor: The Dark World would best its predecessor's $65.7 million opening, but the real question was by how much? Would it join the ultra exclusive club of superhero films to open with more than $100 million or would it fall short? And if so, how short?

Well, it did muster $86.1 million, good enough for fifth place among the Marvel Cinematic Universe, just behind the three Iron Man films and the aforementioned The Avengers. It bested its predecessor by over 30% and I'm sure Marvel is extremely pleased, especially at the prospects for next Spring's Captain America: The Winter Soldier which has looked great in trailers, but it's a character that has, so far, been a tough sell at box office.

It seems that Marvel's grand plan is in full effect and really would we expect anything else? This Fall, they rolled out the TV series Agents of S.H.I.E.L.D. on ABC and just last week Marvel and Netflix announced a partnership that will result in four 13-episode series based on four Marvel characters, culminating in a cross-over mini-series event. At some point, we do have to reach that saturation point, right?

Well, you would think, but the latest returns seem to indicate that the appetite for all things Marvel is still growing. At this rate, you have to wonder just how big Avengers: Age of Ultron will be. Epic doesn't even begin to describe it.

Elsewhere at the box office, the also-rans had a virtual tie for second, third and fourth place. Bad Grandpa looks set to sail past $100 million, while both Free Brids and Last Vegas look to save a bit of face with their strong holdovers. The biggest loser of the weekend continues to be Ender's Game. With a horrible 62% free fall, Ender's Game looks to end 2013 as the biggest box office bomb of the year. With Catching Fire opening in theaters in a couple of weeks, one nail is already in its proverbial coffin.

What is interesting to consider is what effect its performance will have on other potential "next Hunger Games films" such as next Spring's Divergent. After the unexpected success of The Hunger Games, studios started mining any property that featured dystopian futures and so far, only The Hunger Games has resonated with audiences.

I just finished reading Divergent and I'm working on the second book. I remain pretty bullish on it because while the parallels to The Hunger Games are impossible to ignore, it is a unique story and one that clearly resonates with the current political climate in our country. That and I think that Shailene Woodley could be the next Jennifer Lawrence. Not to her lofty existence completely, but I do think she's on the cusp of breaking out big time.

In case you haven't seen it yet, Sacha Baron Cohen was up to his old schtick this weekend when he accidentally "killed" an old lady while accepting the Charlie Chaplin Britannia for Excellence in Comedy at the Britannia Awards in L.A.

Vulture has this great list of 30 great movies that you probably haven't seen. I hate to admit this, but I've only seen two films on the list. So, either the list is accurately titled or I really need to start watching more films. How many have you seen?

Friend of the site Kevin Smith took time out of his busy shooting schedule for Tusk to fly cross-country to host a special fan event for the DVD/Blu-ray release of Man of Steel for Yahoo. The event had principals Henry Cavill, Amy Adams and director Zack Snyder answering fan questions. Among the notable nuggets to surface was confirmation that Lex Luthor would appear in Man of Steel II: Superman vs. Batman and this mysterious tweet from Kevin later.

Via @jakeblckmn "did @ZackSnyder say anything to you about MoS 2" Nope - he didn't say a word. He just showed me a pic that made my year...

Later on his Babble-On Podcast, he let more out of the bag.

I saw the Batman costume. More than that I saw a picture of him (Affleck) in the costume. Now, I don't want to give anything away 'cause that is up to them and stuff, but I am going to say this, I instantly bear hugged him (Snyder). You have not seen this costume in a movie on film before, and for a comic book fan it was mind bending.

On that note, I'll scamper away and relish the fact that this week's MMM actually fulfilled each and every M. Until next week, Mix Well.