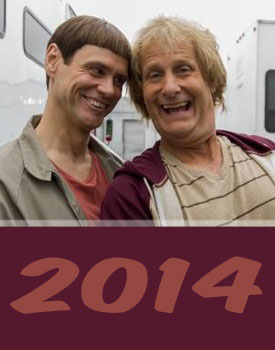 It's that time again! That moment in the early part of January where Tim and I usually thrust out our chests and pretend that we actually know a thing a two about what movies are going to dominate at the box office.

Well, some things change and some things stay the same. Due to popular request, we have incorporated Dannette into the mix this year. As you might recall, Dannette offered her list of sleepers last year and performed smashingly. She shed light on The Place Beyond the Pines, The To-Do List and We're the Millers among others way back at this time last year, long before any of us even thought to think of these films.

As I always say, three heads are better than one or two. OK fine, I don't ever say that, but I'm pretty excited to have Dannette join us as her insights are great and as proof, she completely nailed the composite top 15 with her list. Tim and I certainly didn't come close as my pleas for Interstellar and Godzilla fell on deaf ears while Tim unsuccessfully championed The Lego Movie and A Million Ways to Die in the West.

Time will tell who gets bragging rights, but something tells me that the newcomer might just get the nod. Before we get into 2014 though, let's properly send off 2013 with a review of how we did last year. You can see our predictions here.

We nailed the top three dead on and our prediction of $405 million for Catching Fire is scary good. I will toot my own horn and point out that I did predict it would end up with $425 million. Not bad, eh?

We both completely whiffed on the year's fourth highest grossing film (and still going strong) Frozen. Seriously, this film came out of nowhere and had so far gained an impressive $320 million or so. Oops.

After that, the rest of the guesses weren't too bad with the exception of Ender's Game which we thought would finish in 12th spot, but actually came in at number 56. Double ouch!

But the past is the past and I'm confident that with Dannette's inclusion, we are poised to have our best year yet. Overall, we do think that 2014 will be down slightly over 2013 in terms of overall box office, but there's no telling just how huge 2015 will be. Oh, if you're anxiously looking forward to our sleeper picks, check back later this week.

Without further ado, here is how we see the 2014 box office shaping up.