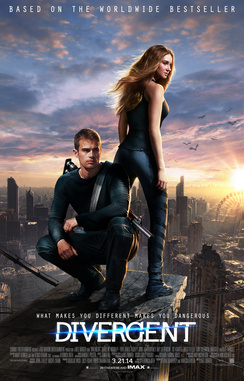 Summit is hoping to back up a Brinks truck this weekend

That's right ladies and gentlemen, we are resurrecting the Box Office Over/Under (aka BOO/U) game, but this time with new and improved technology. OK fine, we're just bringing back the name and the new series of stories won't really look much like the old game.

And no, sadly we won't be bringing the podcast back either, although you never know when Tim and I might get a wild hair to hear ourselves talk. Back to the task at hand.

You might be wondering what film would create such a wedge between us that we'd actually create a whole new series of BOO/U features. That film would be Divergent, but you probably already figured that one out by reading the headline. We do have the smartest movie fans on the Internet after all. More on that later.

This film is certainly one that divides people. It seems like there is no middle ground here. You either love it or hate it. Or at least ambivalent about the film, in which case, you're in the hater camp. There are very few people who think the film will be average.

Why is that? I have my theories, but the one reason I keep coming back to is something I like to call "Next Fatigue." Ever since Harry Potter came out, we've been stuck looking for the next [fill in the blank]. Currently, we are looking for the next Hunger Games and really can we blame ourselves, or the studios?

The Hunger Games franchise has seen both of its first two films break the $400 million box office barrier, but with only two films left, there will soon be a demand that needs to be supplied. The Mortal Instruments tried and failed. Ender's Game tried and failed. The Maze Runner looks to be DOA.

So, the question remains, will Divergent be the next Hunger Games and more importantly, does that matter? Because of the hype, you are either a true believer (me) or one who is just sick of this whole "Next" business (Tim). Since we are naturally divided anyhow, we thought it would be fun to place a gentlemen's bet on Divergent and test our convictions. More on that in a bit.

First, it's only fair to allow both sides to present their case. The over/under number that we have set is $160 million by the time that Divergent leaves the top 10 weekend list at the box office. Here is Tim with his rationale for why Divergent will fail.

The Hunger Games is a rare movie spectacle. No one can doubt that. The two films based the best-selling book series have made over $408 million each. They also happen to be critical hits with average scores on Rotten Tomatoes of 87%. The final two films are poised to do just as well.

Rarely, if ever, do imitators do as well as the original movie hits. Twilight was a similarly successful franchise. Studios quickly pushed out numerous look-alikes soon to be forgotten: Fright Night, Dark Shadows, Abraham Lincoln: Vampire Hunter, The Host, Vampire Academy, Beastly, Beautiful Creatures, etc. The five Twilight films averaged $273 million. The mighty Johnny Depp could only help Dark Shadows to $80 million. The others did far less.

That's why I'm predicting Divergent to do so poorly, at least as it relates to the very comparable Hunger Games. I estimate it will make a decent $125 million, mostly due to a strong opening weekend around $75 million. Then it'll quickly fade as audiences dismiss it as the beginning of The Hunger Games retreads.

Here is my reasoning as to why Divergent will succeed and make it over the set mark of $160 million.

Before we were looking for the next Hunger Games, we were on the outlook for the next Twilight and in at least one respect Divergent has already overtaken Twilight. According to Fandango, Divergent sold more tickets on its first day than Twilight. That's a pretty big deal and it supports my second supposition.

The Divergent fan base is strong and more widespread than we originally thought. I'll be honest, I'm new to the Divergent world. I didn't read the books until after I started to get information about the film's release. I was skeptical at first and yes, at times, you can definitely tell that the books were written by a 20-something young woman, but the basis was there for a cool set of films.

Granted, the fan base was quite conflicted over the third book and even I will admit that where author Veronica Roth took the story was rather unexpected and a bit of a gamble. But, I also think that it's something that will translate pretty spectacularly to the big screen. If the series gets there.

And that's my third and final argument for the over. Summit Entertainment has already put Divergent's sequels Insurgent and Allegiant on the release calendar for 2015 and 2016 respectively. That's a pretty big gamble from a company that is not known for taking too many risks.

Of course, Divergent will not bring in $400 million, but that's not the question. Whether it lives up to the moniker of being the "Next" anything isn't really my concern. My concern is whether I think that Divergent will surpass $160 million at the box office and I'm pretty confident that it will.

So, what is the gentlemanly wager between Tim and I? Well, to harken back to one of our favorite movie wagers of all time, we are taking a page out of Trading Places and will lay a whole dollar on the outcome. Of course, you may not recall that bet in Trading Places and we wouldn't blame you. There were far nicer assets in play in that film.

Here is where you come in. What do you think? Please choose over or under below in our poll and let us know in the comments if you agree with Tim or myself.