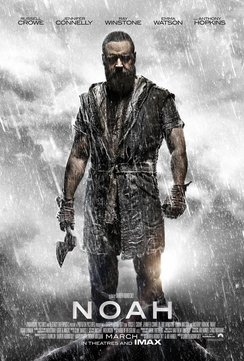 We are one day shy of my favorite holiday of the year and yet, it feels as though Mother Nature got a head start with her April Fool's Day festivities. With temperatures reaching the 70s today, it looks like Spring has finally sprung, which can mean only one thing.

The Summer movie season is like one week away.

OK, I jest, a bit, but with studios moving their blockbusters further and further out, it's beginning to feel like Summer is co-opting April and May for its box office glory. Heck, we're all for there being more Summer blockbusters around, but it would be nice if we could wear shorts to the theater to see them, am I right?

Today also happens to be Opening Day for Major League baseball. I grew up outside of Detroit and when I lived there, I remember that Opening Day was an unofficial holiday in which the entire city shut down and we embraced the return of the boys of Summer.

And then we promptly forgot about them for the next 160 games until the leaves started changing colors. So, with the unofficial start to the Summer box office, let's take a look back at the last weekend in March and its Biblical implications.

Tim always tells me that as long as we don't talk about religion and politics on the site, then we should be good. Of course, every now and then Hollywood likes to force the issue by bringing religious films to the box office.

Whether intentional or not (I'm betting intentional), these films are almost always controversial in one way or another. Of course, that's sort of the point what with religion being the lightning hot button issue of our day. Noah opened to the tune of $44 million which was pretty much universally regarded as quite successful. What no one could agree on though was whether the film was any good.

It seems that most Christians were upset because the film deviated greatly from the Biblical story upon which it is based. Those with less pronounced religious beliefs seemed to dig the fantastical elements of the story. Either way, the film looks set to earn $120 million or so at the box office which means that a sequel is sure to come, right? Maybe they could turn Sodom and Gomorrah into a movie, oh wait, they've already doing that.

Last week's top film Divergent slipped a bit to second place with $26.5 million. So far, the dystopian young adult film has banked $95 million and change which puts it right on pace for that $160 million wager Tim and I have going. It's going to be close for sure.

Winter Soldier will provide stiff competition next week, but other than that April looks to be a great month to let its legs shine. One film that doesn't have to worry about legs is Arnold Schwarzenegger's new film Sabotage. It only opened to a hair over $5 million and will struggle to hit double digits.

Time for our weekly Frozen update. It's dropping like a lead balloon, earning just $348,000 this weekend. The total is now up to $398.4 million, so it's getting closer, but I still think it's going to end up less than a million short of that elusive $400 million number. But it isn't all bad news for Frozen. This weekend it added $7.5 million from Japan making it the highest worldwide grossing animated film ever, bumping down Toy Story 3, with $1.07 billion worldwide.

"Who gives a shit, it's gone." As you can tell from the video, the line was completely dubbed after the fact in ADR. Priceless. And just like that, this week's MMM is gone. Until next week, Mix Well!