'Dumb and Dumber' stick to old tricks in new trailer 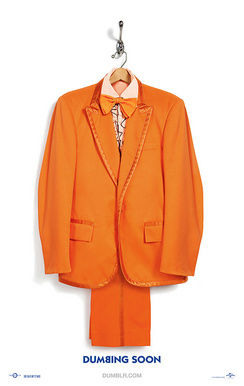 What's that old saying about teaching an old dog new tricks? Well, for Jim Carrey and Jeff Daniels that saying rings especially true in their first trailer for Dumb and Dumber To.

In 1994, I found a lot of things funny that no longer amuse me. To help put this into perspective, I graduated high school in 1993 and in the ensuing 20 years, I have been married three times and finally have two wonderful young children. Most people change drastically over two decades and yet, not 30 seconds into the trailer for Dumb and Dumber To, we are told that absolutely nothing has changed for Harry and Lloyd.

So, in other words, if you're looking for more the same Dumb antics from the first film, then you are set. And really, isn't that what we all want? Hell yes, we do. We don't want younger versions of Harry and Lloyd anymore than we want to have older, wiser more mature versions of themselves.

Nope, we want the same old Dumb and from the look of things from this first trailer, it's exactly what we will get. Don't worry though, the world around the two main characters didn't stay stuck in the Clinton presidency and that's where, presumably, the plot is centered.

You see, it seems that Harry has a daughter from Fraida Felcher, whom some diehard fans will remember as being that "babe who worked for the tractor company." Well, naturally Lloyd falls head over heels in love with her (go figure), but (and speculation alert - is that a thing?) he might end up regretting that as you might also remember that Fraida slept with Lloyd as well.

In other words, if you liked the first film, you'll love this one. Sign me up. Dumb and Dumber To hits theaters on November 14. Oh, and if you needed any more reason to see the film, Jennifer Lawrence has a cameo that will surely be awesome.