New trailer: The guys are back for 'Horrible Bosses 2' 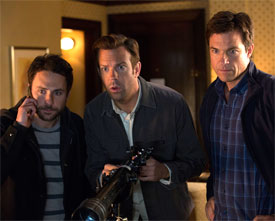 Workplace comedies almost always work -- no pun intended. There's just something about the office setting and boss/employee dynamic that makes it perfect for laughs. Office Space, 9 to 5, The Office, Empire Records, Working Girl, Clerks, High Fidelity, and In Good Company are all hits within this micro genre.

You can certainly add the 2011 hit Horrible Bosses to that list. In case you missed it, the raunchy film starred Jason Bateman, Charlie Day, and Jason Sudeikis as working stiffs who hatch a plan to off each others' supervisor. Jamie Foxx played their crime mentor; sort of a hitman Yoda.

The inevitable sequel lands this fall and a new teaser trailer recently landed. This time around the trio start a business together but still have crime on their minds. Take a look at Horrible Bosses 2:

Yes, returning are Foxx and evil bosses Kevin Spacey and Jennifer Aniston. New this time are Christoph Waltz and Chris Pine. Behind the camera this time is director Sean Anders. The kid from Freaks & Geeks wrote the script again.

Well, he's not a kid anymore. John Francis Daley is 28 and has several writing credits under his belt. In addition to these films he also co-wrote The Incredible Burt Wonderstone and Cloudy with a Chance of Meatballs 2.

I'm expecting big things from Horrible Bosses 2. Bateman has become a perennial comedy star while Sudeikis and Day are two very underrated talents. I can't wait for the film's release on Nov. 26.