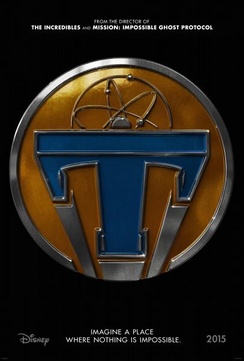 It's funny. Tim and I are alike in so many ways and yet we have our little differences that are both interesting and odd. Case in point, he's a huge Brad Bird fan and I could barely tell you what films he has done. Likewise, I've been a Damon Lindelof devotee since the first episode of Lost aired and Tim's never seen a single episode of that great TV series.

Enter Tomorrowland which is sort of our Reese's Peanut Butter Cup moment where Bird and Lindelof are joining forces for a new and mysterious film. This film has been so shrouded in secrecy that until today, we really didn't have a firm grasp on what to expect. Now, thanks to the teaser trailer below, the film is coming into focus.

This is also only the second trailer for a Summer 2015 film (after last week's teaser for Inside Out), which we are expecting to be one of the most competitive and highest-grossing Summers of all time. So, it's a little like opening a present on Christmas Eve, a little appetizer before the steady stream of massive trailers that we will see between now and the end of the year.

I'm sure it's completely unintentional, but the opening of the trailer (and maybe film?) seems like a direct homage to the beginning of The Blues Brothers. Already, I'm hooked. Of course, John Belushi's soiled condom didn't transport him to another dimension, or did it? I think I just cracked the code of The Blues Brothers.

Back to Tomorrowland, a mysterious pin allows the holder to see a world (Tomorrowland - I assume) in which the optimism and forward-thinking of the early to mid 20th century didn't give way to the sedentary lifestyle of the later half of the century. Oh, and George Clooney is in it.

There seems to be a bit of a fantastical nature to the film ala Zathura and we're OK with that. I have faith that Damon Lindelof and Brad Bird will guide us through an amazing adventure. The ships take off for Tomorrowland on May 22, 2015.