Our Predictions: In a galaxy far, far away, the 2015 box office is massive 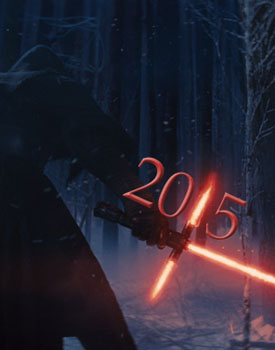 This is always one of my favorite pieces that we do each and every year. Tim, Dannette and I certainly wouldn't ever claim to be box office experts, but when you spend a few years in the business, a few things start to rub off.

It's an annual badge of honor that we take seriously in these parts. Of course, with each victory comes a bit of crow eating. Take last year for example. I took a bold stance on Guardians of the Galaxy, claiming that it would finish up in third place for the year with $300 million. Once American Sniper sorts itself all out, I think the third place finish will be spot on even if I undersold its box office tally by $33 million.

Speaking of American Sniper, it's the perfect case study in futility when making out these prediction lists so far in advance. There's no way that we could have predicted last year at this time that it would such a runaway hit. Despite earning almost all of its money in 2015, American Sniper is poised to become the top-grossing film released in 2014 (technically).

Besides American Sniper, we also missed pretty badly on The Lego Movie by not listing it among our top 15 when it will actually finish in fifth place. Tim deserves credit though as he was the only one of us to list it among his personal top 15 list in seventh place. Given that his box office number was still almost $100 million short of its actual performance, it's still a film that surprised us all.

We backed the wrong sequel horses in Dumb and Dumber To and Night at the Museum 3. They both earned significantly less than their $160 million predictions. However, Dannette just about nailed her prediction ($255 million) for The Hobbit: The Battle of the Five Armies (actual $250 million).

So, it's not all bad. Overall, we accurately predicted ten of the top 15. I'll take the 66% success rate in such a bizarre year. We figured that the box office would be down in 2014, but we were more pessimistic than the actual performance. We predicted that the top 15 films would take home $3.4 billion, while in reality the top 15 looks to end up with $3.7 billion. Of course, that difference is yet again almost entirely due to American Sniper.

Looking ahead to this year, you can see our predictions below. Either we've gotten really predictable, or else 2015 is the one that's predictable. I'm betting on the latter. I don't know if this is good or bad, but it seemed easier to plug in the top 10 this year than in years past.

We've talked on the site in the last few weeks that 2015 is really a year of haves and have nots. While we fully expect the total box office to increase significantly over last year, the majority of these gains will be seen by the top few films which are poised to have massive years.

We are all in agreement that The Force Awakens and Avengers: Age of Ultron will be in the top two spots. While I should be cautious about predicting so much money after the prequels, I just feel that this new version has a breath of fresh air behind it and will set the box office on fire.

From third place on, there's a lot of disagreement over the order, but we pretty much independently all selected the same top 15 films. I am alone in my faith on Mad Max: Fury Road and I went strong with it finishing in ninth place with $250 million. Dannette is a champion of the atypical love story with her selection of Fifty Shades of Grey in fifteenth place. While Tim likes The Fantastic Four in ninth place with $230 million.

Overall, we see the top 15 films earning $4.6 billion in 2015, a massive 24% increase over 2014. Dannette and I are really optimistic about the box office's ability to bounce back while the box office grinch Tim is a little more cautious about 2015's earning potential.

Without further ado, here are our full predictions for the top films at the 2015 box office. Let us know what you think.