Generations collide in 'The Intern' trailer 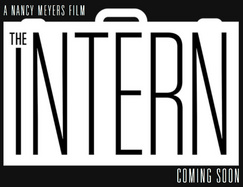 There's a secret that I haven't told many people. I grew up watching and enjoying the so-called "chick flicks." Sleepless in Seattle, Baby Boom and yes, I enjoyed Beaches. I cheered as Thelma & Louise went out on their own terms.

I don't necessarily call them "chick flicks" though because I find that term a bit archaic at best and good films are good regardless of what micro genre you try and cram it into. Nancy Meyers was as much a voice of my youth as John Hughes and Steven Spielberg.

Father of the Bride remains one of those standout films from my teen years that helped to shape me into the person that I am now. As the father of young daughter, I'm actually a little scared to revisit the film for fear that I won't be able to make it through the whole thing with dry eyes. Yes, I'm a softy at heart and I'm not ashamed to admit it.

With this in mind, I was eagerly looking forward to Nancy Meyers' next project The Intern. To be honest, I didn't really connect with her last two films It's Complicated and The Holiday and I was concerned that her films no longer spoke to me. Thankfully, those fears were allayed when I watched the trailer for The Intern which debuted this morning.

Sure, there's going to be a million comparisons to The Devil Wears Prada and it's easy enough given that we've got Anne Hathaway and an intern, but the similarities end there. This time Anne is the boss and enjoys an open and friendly rapport with her employees including the December-May internship between herself and Robert De Niro.

Like many mass appeal comedies, the strength of its humor relies on the supporting cast and it's pretty apparent that they deliver in spades. I've long been a huge Andrew Rannells fan and it's good to see him finding some juicy territory on the silver screen after owning TV and Cable for years. Nat Wolff, Adam DeVine and Anders Holm are all recognizable TV talents that appear set to crossover in a huge way on film.

The Intern debuts in theaters on September 25.