New 'Mockingjay' trailer foretells the end of 'The Hunger Games' 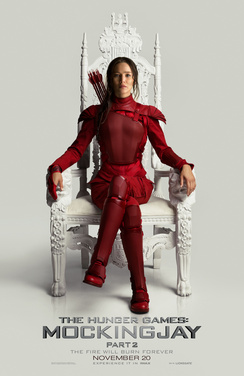 All good things must come to an end, right? That's doubly true for the final installment of The Hunger Games. Despite filmmakers' attempts to prolong the franchise by taking the last book of the trilogy and splitting it into two films, Katniss Everdeen will finally hang up her bow this November.

I find that final chapters are bittersweet these days. As much as we wish that these stories could go on forever, most of them have overstayed their welcome by the time the last reel of film runs out. I think you saw that with The Hobbit and Twilight and despite my enjoyment of The Hunger Games films, it's time to put a fork in the franchise.

It's not that I didn't care for Mockingjay Part 1, but it was only half a movie. There was hardly any action or real forward movement in the plot. The corresponding book was guilty of the same thing as it was all buildup and then a furious finish that left me, at least, wishing they had spent more time developing the final battles.

I suppose I got my wish with this extended film as it looks as though at least half of the concluding chapter will be focused on the final battle in the Capitol. Today, we get our first real look at The Hunger Games: Mockingjay Part 2 and it's quite impressive. Eagle-eyed viewers who have read the book might even pick up little clues that hint that Lionsgate most assuredly did not pull the punch on the ending despite my incredible disbelief that they will be able to show the ending and still get a PG-13 rating, but I suppose crazier things have happened when it comes to the MPAA ratings board.

The Hunger Games: Mockingjay Part 2 will debut in theaters on November 20.