Seth Rogen's 'The Night Before' gets raunchy red-band trailer 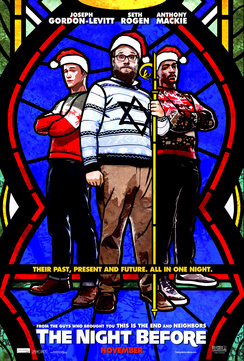 Forget the battle between Marvel and DC for a minute. This Christmas, Sony is bringing you the comic book mashup that could only exist in the mind of Seth Rogen.

Imagine if you will that The Green Hornet, Robin and Falcon all got together for a night of drinking in debauchery in New York City on Christmas Eve. Now imagine if they partied like Harold & Kumar and you've pretty much got the whole gist of The Night Before.

The premise sounds interesting and there's just enough positive vibes in the recently released red-band trailer to get me intrigued, but they're going to have to do a better job of selling me when the November 25 release date approaches.

I absolutely adore Joseph Gordon-Levitt and Anthony Mackie, so I'm hoping that there's a lot more to the film than simply another rehash of A Very Harold & Kumar Christmas. Talented newcomer-ish Jillian Bell looks solid and she stole her scenes in 22 Jump Street and the scene in the church at the end was classic.